As a guide dog user, I am accustom to calm, rational explanations to strangers of how my dog helps me navigate and why my service animal is allowed in public places, but perhaps my most exhilarating experience as a person who is blind came from living a bit of life in the fast lane – literally.

Most car dealerships won’t turn away a customer with a certified bank check in hand, but some years ago I strolled into a slick Porsche showroom with my guide dog in harness, and it took some loss of patience and assertive posturing to convince Shawn Young, the rep, to brush off the yellow dog hair from the leather seats and hand over the keys to the fastest, newest mid-engine coupe on the market. I was of course blind, and three letter words like the ADA were replaced with four letter words until a shiny black Cayman S, perhaps the most beautiful car ever designed, was hand delivered with a red bow to my doorstep. 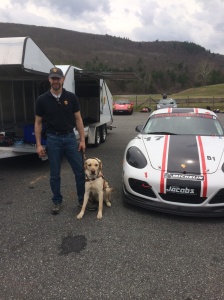 You see, two decades earlier when I was in college and met my wife Melissa, we had a choice between eating, paying tuition, and buying a rusty old 911 Porsche, the latter lost out. At that time I promised that if I ever am able to do so, I would buy one. That day had come, but the day also came when I no longer had enough vision to keep my drivers license.

But I kept my promise. It was 2006 when Porsche announced it was releasing a mid-engine bottle-rocket that reminded me of the Porsche 550 Coupe or the Porsche 904 Carrera GTS Coupe, both legendary cars from previous eras. Running my hands over the car, it feels like an airplane from the front, and door panels fade away into the side-mounted air vents that slope into a roofline that narrows as it blends into the voluptuous rear hips of the car. When you open the hood, there is nothing there. But if you open a door and sit in the luxurious seats, your back is against its biggest secret. Set between the rear wheels, and sitting on a lightweight but race-ready rigid chassis, the very powerful engine is hidden and balanced so perfectly in the middle it reminded me of being on the middle of a see-saw as a kid. This car set the bar for a two-seat coupe the year I bought it. It tested around Germany’s Nürburgring racing circuit and set new standards on the famed Northern track for turning the fastest lap while using the least fuel. In other words, it was the perfect car for a blind guy, capable of rocket fast take off for a quarter-mile sprint in 13.6 seconds and achieves a top speed on the track of over 170 miles an hour.

Now all I needed was a driver, capable of dealing with the increased output from the 3.4-liter engine who could manage the six-speed modified transmission, with the ability to shift with the right hand, steer with the left, and heel-toe the gas pedal and clutch through shorter ratios and synchromesh rings on first and second gears, so much torque power they were carbon coated to assure maximum strength.

And if she could have black hair to match, all the better. Enter my wife Melissa into this story. From the first day the red bow came off (the car that is) its red brakes got hot, and it was not long before I could feel the lateral acceleration from my navigator seat telling me this femme needed more than city streets to access both her and the car’s full potential.

So, I tucked my guide dog at my feet, bought a racing helmet and Melissa and I took off to Road America, a four mile race track with 14 turns, sometimes called the best test of road racing. After a few times around the track in high speed drivers education instructed by new friends including Dan Cubric of the Porsche Club of America, Melissa’s driving gave me reason enough to buy my first torque wrench, and from that day on we had a lifetime supply of perhaps the most expensive tire swings in the world.

It was not long before Melissa, me and my guide dog Quinn overcame all stereotypes. She, as one of a few women that was building her skill-level at high speed driving fast enough to continue moving up to the next level on the race track, leaving many a male ego in her rear-view mirror, and I, as her visually-impaired pit mechanic, learned how to change and bleed brakes, swap rotors, click in racing seats, install six-point racing harness bars, and troubleshoot engine module codes using a computer and JAWS software. Shawn, that hesitant Porsche rep, shook my hand and invited us to join the Porsche Club of America.

But then, something amazing happened. Porsche announced in a press release that the company was looking for stories from current and past owners of the cars of Zuffenhausen and launched My Porsche Passion Contest. Porsche fans all across the nation were invited to write and upload to the contest website a story of 500 words or less that has to do with their passion for a specific Porsche, an experience, or the company over the past 60 years. After Porschethe contest closed to entries, a panel of Porsche judges chose 20 finalists, which were put to a vote online. The authors of the stories with the most votes would win an all expenses-paid trip to the Porsche Sport Driving School in Birmingham, Alabama. My entry, where I described my passion for the sound of the Porsche Cayman with Melissa at the wheel, roaring around turn five at Road America, passing me with wheels squeeling with delight while I waited with my kids , beat out every story about all those sighted drivers and won the most votes of the contest. Now, this got Porsche scratching their heads again. The prize was the most intensive and comprehensive curriculum available at Barber Motorsports Park, host of the IndyCar Series, and is noted as the most beautiful race tracks in the world with 2.38 miles, 16 turns and over 80 feet of elevation changes.

With a helmet, big smile and my guide dog digging his nails into those beautiful leather seats this time I co-piloted the latest Porsche models; Carrera S, Panamera Turbo and I experienced hot laps with the incomparable Porsche 911 Turbo S alongside some of the fastest racecar drivers in the world, with Melissa in tow a car length behind me. The class was not complete until Melissa and I drove a brand new Cayenne off a steep cliff into a muddy river, just for kicks. Five years and 35 track days later, Melissa and I have worked as a team on race paddocks from Alabama to Virginia.

My trusted guide dog Quinn kept me safe at all those track days and retired recently. My new Guiding Eyes dog named Gus joined us for our first and last event of the season at Lime Rock Park raceway. a 1.5 mile track with 7 turns not so far from Guiding Eyes here in New York. For now, the Porsche has had its day and another race car shows up.

But now, our time and support goes to giving back so other people can have a guide dog like me. Our family is home socializing puppies for guidingeyes.org and Melissa and I are raising our four beautiful children.

Now and again, Melissa catches me in the garage tinkering under the car in the dark and in turn, once in a while I hook up a cable under her dashboard and read the revlimiter on my computer that tells me she somehow hit 7500 rpm when she ran out to get milk. Nearby our new friend Spencer, who has adopted a Guiding Eyes release dog Maxine runs a shop called speedsporttuning.net and Spencer tells me he has fifty hours left to build a new and improved Cayman S with paddle shifters into a race car.

Now, that puts a twinkle in my eye, even if I can’t see.