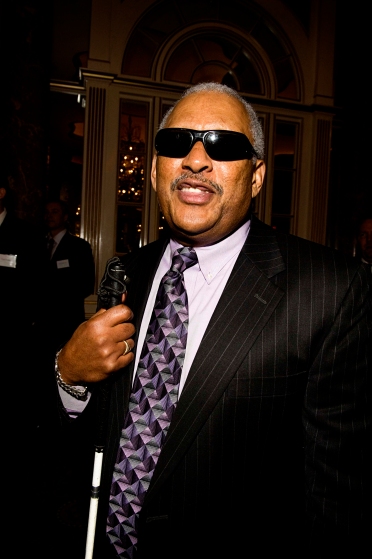 [Stephanie is a one-on-one volunteer through the Massachusetts Association for the Blind and Visually Impaired’s Volunteer Program, which matches volunteers with individuals in their community who are blind or visually impaired.]

“Hello!” the deep voice echoes as I climb up the four stories to his Brookline apartment.

“Helloooo,” I say, mocking the voice.

This is how it starts every week.

While it’s only been a few months, my bond with Dean is profound. Two years ago, I left everything familiar in Texas and moved to Boston. I came with zero regrets, however something was missing. As a member of Delta Gamma at the University of North Texas, I was immersed in endless volunteer opportunities for the Service for Sight program. But being away from all of that – my sorority sisters, my family, etc. – I felt empty. I was stuck in the loop of working 9-5 and going home just to do it all over again.

Until I met Dean.

I was very anxious prior to our first meeting — Will I like him? Will he like me? The questions and worries began to accumulate in my head, until I finally stood in his living room. I don’t know if it was the stack of guitars sitting by the couch or the sweet greeting from his guide dog Thor, but I felt that comfortable sense of familiarity – something I hadn’t experienced since moving.

With a tall (very tall) stack of mail on the table, he pulls out the Penzeys Spices Catalog and asks me to read him a recipe. As I read through the delicious recipe, I fumble over words and throw in side comments such as “Great… now I’m starving!” and “Are you trying to torture me?”

“You’ll do just fine,” he laughs, treating me like a lost puppy he just brought home.

That was when the journey began.

Dean and Stephanie take a selfie!

Every Wednesday (or sometimes Mondays or Tuesdays), no matter what kind of day I have had, spending two hours with Dean always makes it better. His generosity toward many nonprofit organizations and the countless stories of his friendships and childhood always stick with me.

Dean hasn’t always been blind. In fact, it wasn’t until after he finished his education (Bachelor’s and Master’s) in the 70’s when he lost all of his eyesight due to retinitis pigmentosa, a hereditary disease.

I didn’t quite understand what kind of man Dean was until I saw him on a couple of Perkins billboards on I-90, read over 100 holiday greeting cards that were sent to him, discovered he was a reverend and learned that he played acoustic blues guitar at an open mic in Cambridge.

“In the 1970s and 1980s, blind people did one of three things: they caned chairs, tuned pianos, or stood on a street corner selling pencils,” Dean told WickedLocal in a 2011 article. “That was the sighted person’s vision of blind people. And I decided I didn’t want to fit that mold.”

I can tell you, he truly succeeded.

For example, he cooks all of his own meals (using only his hands). These meals aren’t small, and they explain his love of the Penzeys Catalog. He also hosts a large Thanksgiving every year, complete with an 18-pound turkey, the traditional side dishes and a table of 20-something guests.

Using his fingers to flip the food, Dean found a way to continue a few of his favorite things. It’s not just cooking, though. Come Christmas, he insists on carrying his “real” Christmas tree up the four flights of stairs – unable to see any step.

He takes guitar lessons, sees a personal trainer, is a member of several theatres in Boston and attends church regularly. He does it all.

With Thor by Dean’s side, I sit at the dining room table for two hours… listening, watching and understanding the lifestyle of a differently-abled person who is able to do it all.

His fatherly concern for my safety and the time he takes before each session to ask “how are you doing?” – his selflessness– are just the little things that make life better.

Volunteering through the Massachusetts Association for the Blind and Visually Impaired isn’t just reading some mail, paying bills or going shopping for a person who is visually impaired. It’s not about doing a stranger’s chores for two hours a week. It’s about the bond – the laughing at each other, the intense discussions over the Patriots game, the mockery of the junk mail we read.

Interested in becoming a volunteer through the Massachusetts Association for the Blind and Visually Impaired? Apply online here. If you would like a volunteer for yourself or a loved one, fill out our Service Referral Form or call 617-972-9119.

1 thought on “Wednesdays With Dean: A Volunteer’s Story”