There are few men in the Boston area who have done as much for the blind community than NBA Celtics owner and philanthropist Wyc Grousbeck.  While he is a high profile owner of an NBA team it is clear from this conversation he is a devoted and loving father. In mid-November, at the PRX Podcast Garage in Boston, Dangerous Vision hosted a LIVE  conversation between host Randy Cohen and Wyc Grousbeck.

Executive Director of the Massachusetts Association for the Blind & Visually Impaired Sassy Outwater-Wright welcomed the audience mainly from the blind community by saying “there is no right way to do blind. The Massachusetts Association for the Blind & Visually Impaired or MABVI is here to support you where you are in your journey.” She went on to say there are many voices in the blind community and this is one of the reasons why she loves the podcast, there is room for discussion and dialogue.

This is the first part of a two-part episode with Wyc.  For more information visit www.mabvi.org/resources/dangerous-vision/

In the latest episode of Dangerous Vision, Randy Cohen talks with Marla Runyan,  a former world-class American track and field athlete and marathon runner who is legally blind. At age nine, she was diagnosed with Stargardts disease, a form of juvenile macular degeneration that causes progressive vision loss.

Randy and Marla talk about running, determination, and reinvention.  Her running career is impressive–Marla qualified for the 1996 U.S. Olympic Trials in the heptathlon, where she finished 10th but fell well short of making the Olympic Team. In 1992, Marla competed in her first of two Paralympic Games, and ultimately won 5 gold medals and set 9 world records in the T13 visually impaired classification.

In 1996, Marla relocated to Eugene, Oregon and reinvented herself as a middle-distance runner. With a new coach and heightened focus, Marla won gold in the 1500-meters at the 1999 Pan-American Games and finished 10th in the IAAF World Outdoor Championships in Seville, Spain.

Today Marla is the manager of the para-athletic division for the Boston Athletic Association.  The B.A.A., established in 1887, is a non-profit organization with a mission of promoting a healthy lifestyle through sports, especially running. The Boston Marathon is one of many races put on by the B.A.A. For more information visit https://www.mabvi.org/resources/dangerous-vision/

Randy Cohen and Fernando Albertorio have a lot in common. Both are connected to Harvard and MIT, both have an entrepreneurial spirit, and both are living with vision loss. Randy lives with retinitis pigmentosa and Fernando with albinism. Fernando talks about growing up in Puerto Rico with this condition, the valuable lessons he learned from his father, and his mother’s indomitable personality. Fernando creates products that enhance people’s lives, as the CEO of the Sunu Band.
Designed for when you can’t easily use sight or due to a vision impairment, Sunu Band enables you to walk and travel with confidence. Sunu Band is the only smart-band that guides your way around obstacles. It uses sonar or echolocation to detect objects up to 16 feet or 5.5 meters away. For more information visit http://www.mabvi.org/resources/dangerous-vision/ 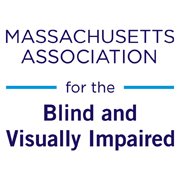